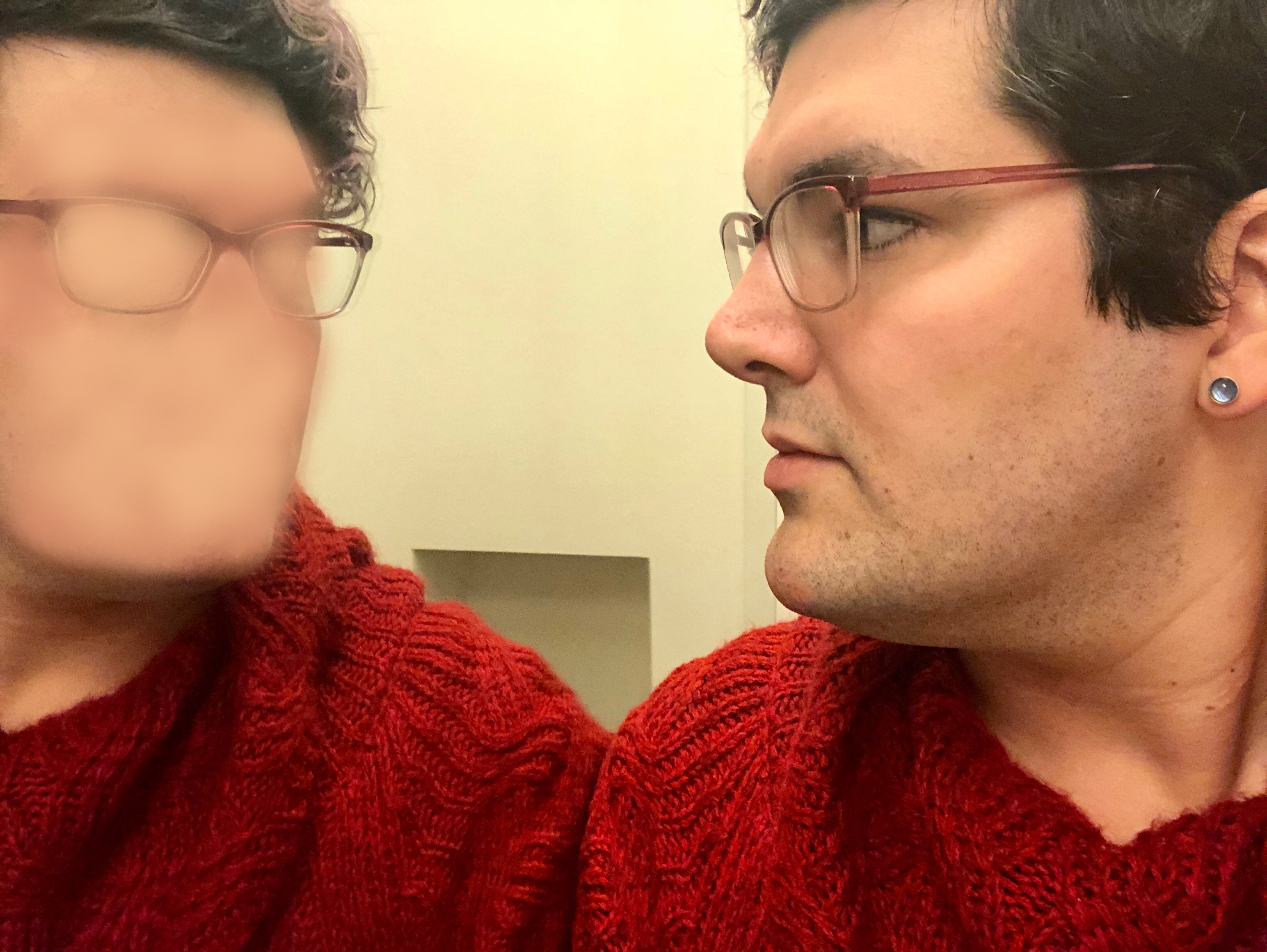 So I’ve talked quite a bit here about my experiences with dysphoria but I’m not sure I’ve ever attempted to define it, partly because it is a tricky concept to convey to someone who has never experienced it. But I’ll take a stab at it with the disclaimer that trans people don’t all experience dysphoria in the same way and some trans people never experience it because contrary to what psychologists think, being trans doesn’t require dysphoria. Some people are lucky enough to discover their true self through the experience of gender euphoria which is when you have extreme joy in finding something about your body, presentation, or the way people perceive you that affirms your gender.

On most days, I have a low level of background dysphoria going on. Some of it has always been there and I was kinda successfully ignoring it and some of it may not have been and has developed or been revealed as I’ve gotten closer to bring other parts in alignment with my gender. It’s hard to look back and accurately know what I was thinking in the past because one of my experiences of gender dysphoria is that my brain blocks out a lot of memories that don’t align with who I really am. A lot of my past is fuzzy or completely blocked from my consciousness due to trauma as well.

What I do know is that there were times that do clearly stick in my head where I experienced bursts of gender euphoria as a kid such as when I would play dress up and walk around in heels, or when I would play imaginary fairies or mermaids with my sister, or when I felt accepted as “one of the girls” in my friend groups. A lot of that went away as I reached an age where gender roles were more strictly enforced and in particular, a lot of my puberty is blocked from my memory both due to how I was treated by society and because more of my dysphoria started becoming apparent as the wrong hormone was taking front seat. I am so jealous of kids who have affirming parents and figure it out early enough to use hormone blockers or transition early on before the wrong puberty goes too far. It makes a lot of things easier.

One of the things I do know is that early on, stubble gave me dysphoria similar to how it does now. That, and my dysphoria around my prominent chin, are the biggest reasons I grew a beard at 18. I was getting to the point that I would have to shave my chin twice a day to look clean shaven. At first it was just a goatee but by 21 I think I was able to grow a full beard. A positive for combating dysphoria at the time but unfortunately now I have to get rid of all that thick, dense hair very painfully.

On a daily basis, dysphoria is like having little pin pricks constantly poking your skin. Or like wearing shoes that are too tight. It’s annoying and eventually it brings you to a breaking point. Everyone’s tolerance of that breaking point is why some people don’t come out until later while others figure it out early on. That can also be helped along by someone effectively helping you find the right size shoe and suddenly you realize how they didn’t fit all along. And trying to push past that background pain every day is exhausting and means that you can’t bring your full self to what you are doing until it is dealt with. I sometimes wonder where I would be in life if I had been born cis and been able to just move along happily through life without having to stop and deal with the dysphoria or the self worth issues that go along with it.

On days when my dysphoria is more acute, that pain is brought more to the forefront of my mind. Sometimes it is bad enough that I will look into a mirror and I can see enough to style my hair or assess my outfit but my face will be completely blurred out – as in I physically cannot get my brain to see my facial features. Dysphoria, as far as I can tell, is the brain not being able to handle the cognitive dissonance between the reality of your brain’s self image of you and what is physically in front of you. It also means that even on less bad days, parts of my body are often distorted so that what other people see isn’t the same as what I see. For me that most often revolves around my chin, or shoulders, or body hair. I will look at myself and all I can see is what feels to me like a giant, cartoonishly distorted chin with a cleft so big that I feel like Gaston from Beauty and the Beast.

Another way that dysphoria plays out for me, especially lately, is that an area of my body may feel completely absent. Most days now my genital area essentially feels like a black hole. It doesn’t exactly feel like there’s nothing there but almost the opposite of nothing like antimatter or something. That’s probably the biggest reason I’ve been much more asexual lately, at least with my own body. It is hard to think about sex when your mind is actively avoiding thinking about what body parts you might use. I’ve had to be much more creative and luckily when you have queer partners, using your own genitals isn’t as essential.

I’ve found that what helps the most when I’m feeling actively dysphoric is to focus on the parts of my body that I do like. Often it doesn’t help to have people compliment the areas you are feeling dysphoria around because it just brings more attention to them. But focusing on things like how great my legs are or how soft my skin is gets my mind to see the positives and less of the negatives. Sometimes affirmations can be helpful though, even if in the moment you can’t hear them. Lately I’ve been feeling more dysphoric around my speaking voice but when I’ve told people that, many have told me that it isn’t particularly deep and is actually rather feminine. Those are the things that I come back to later and think about when I’m struggling.

The reason that it is so essential to have insurance that covers gender affirming treatments and low barriers to accessing them is because dysphoria is such an insidious beast. It often feels like you can’t be a whole human until these parts of yourself are aligned with who you really are. And ultimately, all most of us really want is to be fully seen as ourselves. So please, don’t put up barriers to keep trans folks from getting there.

PS – I just remembered another trick I found to help combat dysphoria. Find things that you can do with your body to make it feel like your own that you can focus on when the rest of it feels wrong. For me it really helped me to be able to see myself to get my ears pierced, get fun glasses, get visible tattoos, and dye my hair. These things remind me that I can make changes because it is my body and my rules.